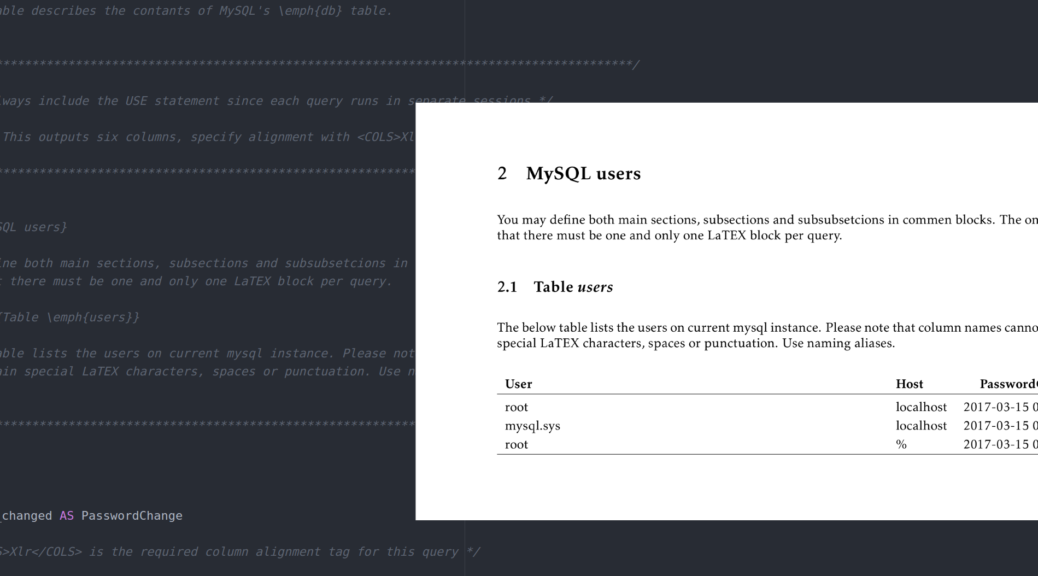 How about a super-simple tool for making, pretty-printed PDF research reports from your usual mess of intricate SQL queries?

There are times when you have to let the rest of your news room into what your’re up to, spending hours and days drilling into large data sets pulled and tweaked by complex SQL queries.

Reporting preliminary research results in table form can be a daunting task, specially when you’re trying to make sense of what your SQL queries actually does. You don’t want your editor to set the story off in the wrong direction just because you forgot to point out some crucial piece of information in the table description.

Should have put some comments in that SQL file, huh? Well, that’s what the mkres utility makes you do: Write comments above your SQL statements, explaining exactly what went through your head while writing the query behind a specific table. Your comments will the be nicely embedded into a human-readable PDF report.

In an effort to reduce the time spent on creating long paste-up’s of ASCII-art tables from mysql’s command-line client, i wrote a simple script that would generate a legible PDF document directly from the SQL script, using the content in the comment blocks as the source for structure and textual content.

In fact, mkres needs those comments to work well, because they will be nicely displayed alongside your output tables when redering the PDF document from your SQL file.

It sometimes happens that such trivial problem-solving scripts grow into full-blown GitHub projects. Not quite so yet, but I do believe mkres might come in handy for anyone doing quick-and-dirty database research with SQL scripts. So, I’ve published the bash script for you to try it out.

Basically, after installing, all you have to do is to run mkres from the directory where you put your SQL file. The file title (without .sql extension) is all you have to specify. For example, if your SQL script is /path/to/sqlscript_dir/report.sql:

Mkres will probably fail at first pass, because it doesn’t know your MySQL login. However, a configuration file is created and placed in the same folder as your SQL file. It will be named [your_sql_file_title].conf. Simply edit this file and include MySQL server name/IP address and your login before running mkres again. Also, the document language, title and author is specified here:

It’s all based on good old LaTEX, a widely used document preparation system. You will have to learn some basic LaTEX tags, but that shouldn’t intimidate anyone familiar with scripting and query languages in general.

Simply write your LaTEX code in a comment block above the query, along with section and subsection titles. The LaTEX block must be wrapped in html-like <LATEX> tags, like this:

You must specify the extent and horizontal alignment of each table cell by including a simple tag right after your SELECT query:

This element consists of one letter for each column in the output table, specifying how LaTEX should render that column. You will get an error if the <COLS> element is missing, or there’s a mismatch between the number of columns returned by your query and the number of letters in the tag. Each letter can be one of the following:

Wrapped up in a container

I’m not a bash programmer. Gotta be lots of WTF’s in the code, so feel free to submit your pull requests! The script is published under GPLv3.

The script works on Linux systems, but it has lots of dependencies. Running it in my espena/latex Docker container should be the preferred way.

The Dockerfile for the image is found here, if you’d rather build it yourself or modify it in any way.

The following debian packages are required to make mkres work: